What follows is an introduction to the original number and measure system responsible
for the design and construction of the Great Pyramid at Gizeh.

If a curiosity for archaeology, pyramidology, numbers, geometry, architecture, astronomy, phi, pi or
simply coincidence brought you here, be assured, i have no axe to grind, no con or hustle, no obligatory
leap of faith, nothing to sell and regrettably, no sexy cult to draw you in with. You will face little more
complexity here than square roots, powers, ratios, scale and some eight decimal numbers, so don't just
take my words. Confirm and learn the dimensions as you go rather than rush through to the end
in a frantic search for the "gist". It's there. I just didn't put much into it.

On a skill level, any competent grade eight arithmetic student with a calculator
should get through intact. A few white hairs perhaps, but intact.

There's enough speculation written and truths claimed about the Great Pyramid over the previous
five thousand years to pile up several word pyramids of equal size around it. Despite an astonishing
level of creative output, absent the original system of numbers and unit of measure applied
at the planning and construction phase, all remains resting on shifting sands.

Encouraged at every turn to "think outside the box" perhaps it's time for a closer look at
what got us into boxes in the first place. This presentation will reveal the original ratios
and dimensions of the upper and middle chambers labelled, "kings" and "queens"
about eight hundred years ago, by people who didn't know why.

From here on in they are designated, "Hi Phive" and "Point Phive", respectively
for reasons which will become obvious within a few minutes.

If you proceed, keep in mind, ahead are precise scale models of existing structures which were designed
and assembled in prehistory, before the catastrophe that drove humanity mad by amnesia fell upon us.

They knew the math. They had a scale. They made a plan. We found it.

The lix unit is base ten, and ever so slightly longer than a foot. Been around longer too. That little difference is a big deal.

"Pyramidologists have long known the Gizeh pyramids were not designed with the British Inch, that the "primitive inch"
was slightly larger. Piazzi-Smyth, in the mid-nineteenth century determined the conversion to be approximately 1.001.
Dr Adam Rutherford (1957), using more modern equipment, placed it at 1.00106. He brought the most advanced
equipment and professional surveyors to measure and decode the Great Pyramid. A sincere effort was applied
to produce a cross-section with a coherent trigonometric application of the measurements.
He and his team generated the most reliable dimensions to date". (jb)

The Great Pyramid was measured in British inches then converted, divided by 1.00106, into primitive inches.
Rutherford settled on the height of the so called "king's", chamber at 230.38871 primitive inches or 19.19906 British feet.
Had he rounded the height to 19.2, all you will learn here, and so much more, would have become instantly transparent.
The key to decoding was to convert Rutherford's base 12, 'primitive inch' measurements into base 10 lix
then relate the chamber dimensions to one another.

We didn't need to round it off. 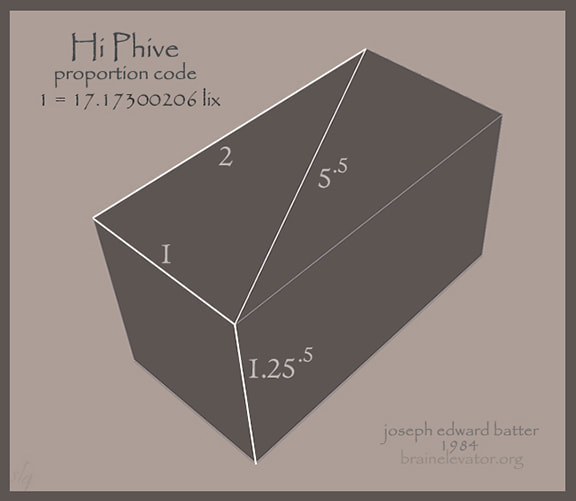 When he established the "lix grid", with the "pyrameter" triangle, (menu/Overview), and plotted
a 1/200 cross-section of the Great Pyramid on it, four "Hi Phive" chamber codes were revealed.
They are a Song of Joy to Number. At the very foundations of "Earth Measure". 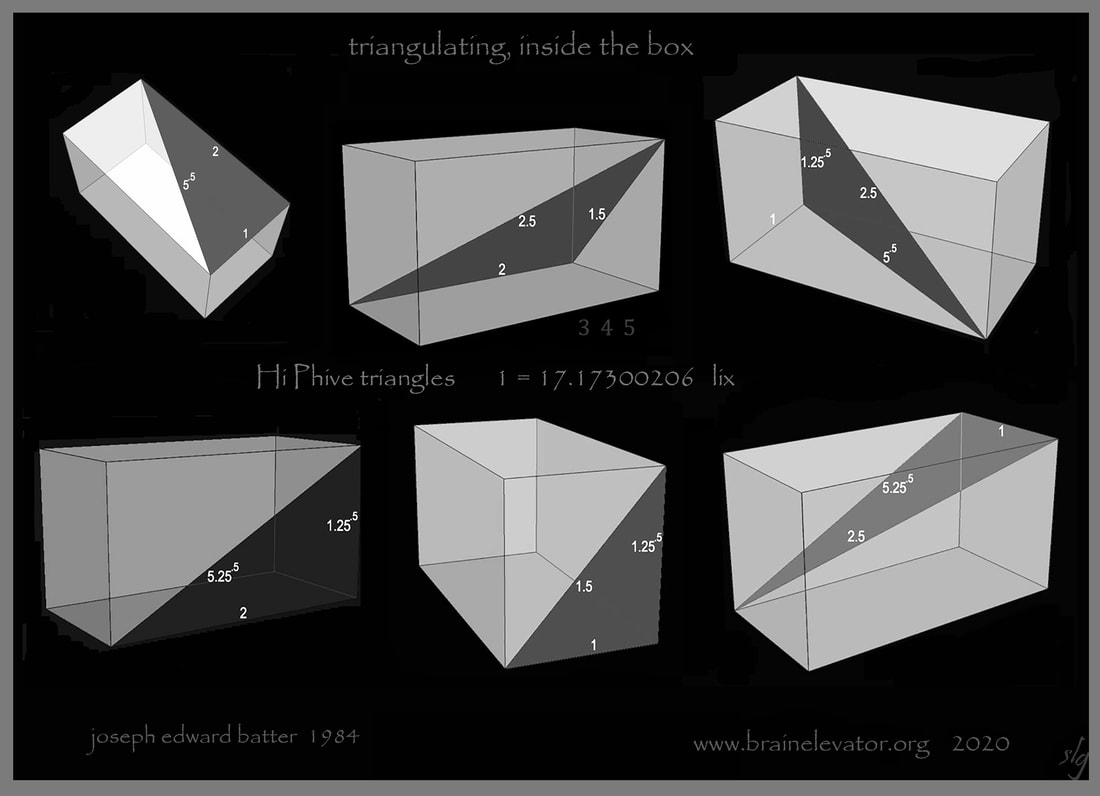 Here's your opportunity to reveal the actual "as built" dimensions
of the most well known and least understood rectangular cube in recorded history. 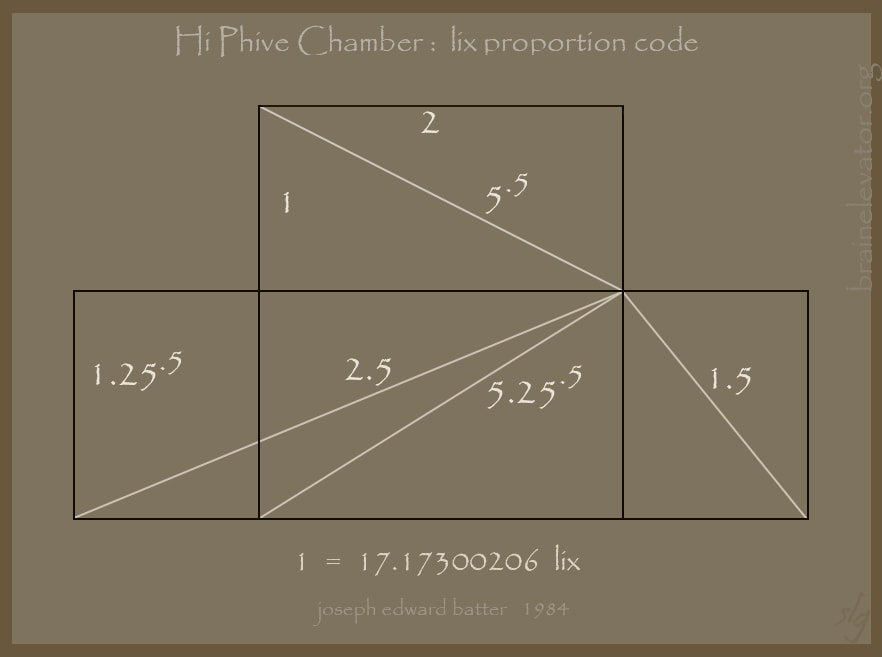 
In 2008, while exploring the dimensions, i found a 5th code and a remarkable module, 73.728 lix.
It led to "Point Phive" (queen's), chamber geometry, Simpson's primitive inch, "unit dimension" code
and a wondrous artifact i had no choice but to call a "brainelevator". 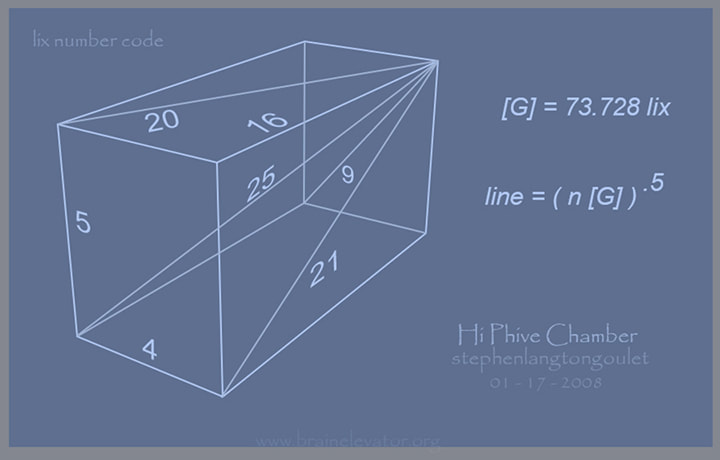 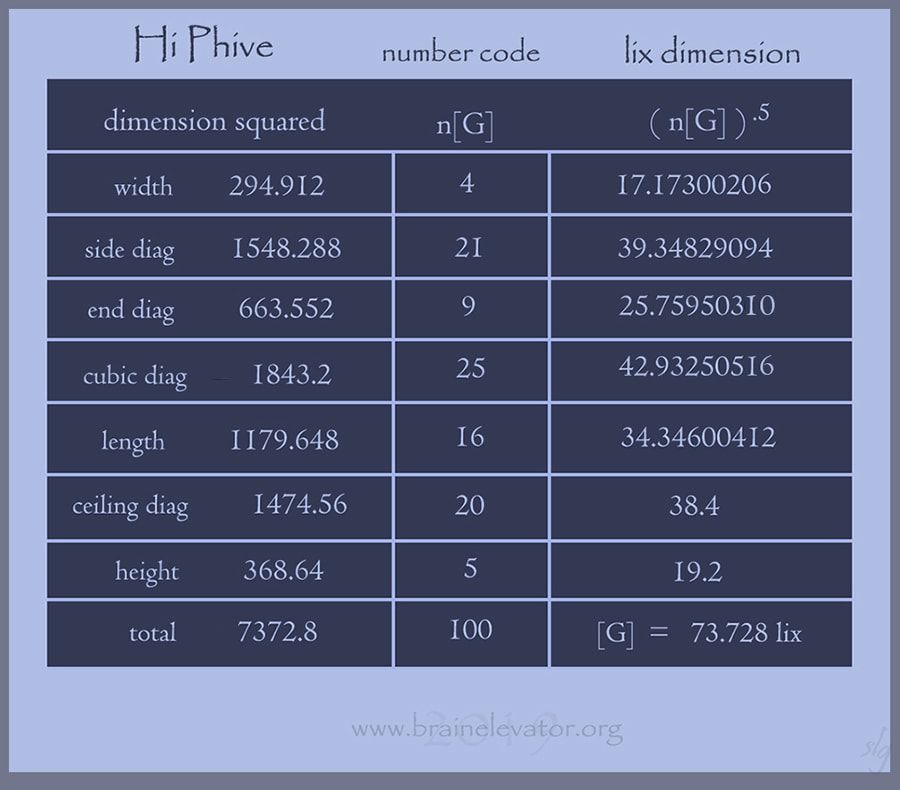 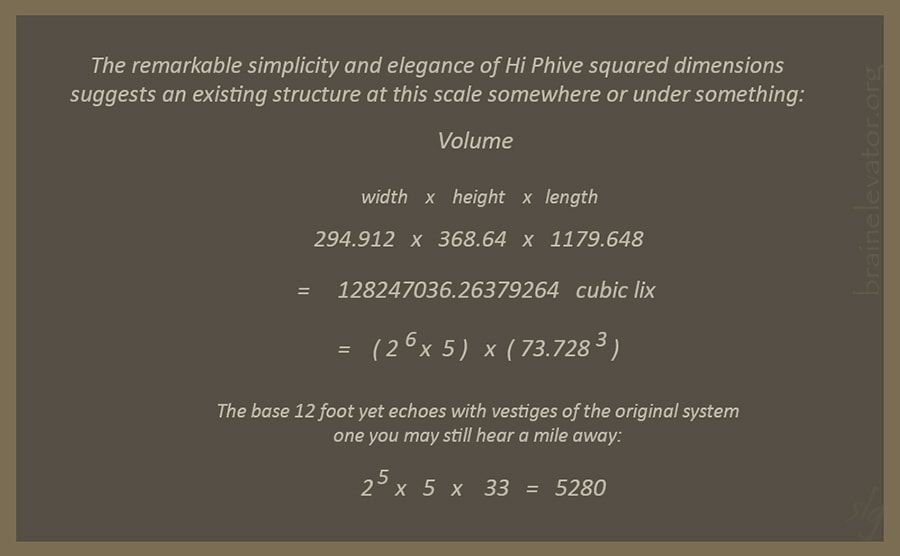 You may well be wondering by now, how the designers and builders could possibly have known
these precise numbers and their powers and roots at least 7 millennia ago.

At this point let's step "outside the box", for a brief thousand pace perimeter walk,
around the Great Pyramid, bringing along the height, length and ceiling diagonal,
squared dimensions, from Hi Phive to guide us.

Every square describes two circles. One touches the sides, the other, the corners.
The ratio between the two is the square root of 2.

The third circle here, in between the two, is the sum of the four sides of the base.
Its radius is the height of the Great Pyramid...in lix units. 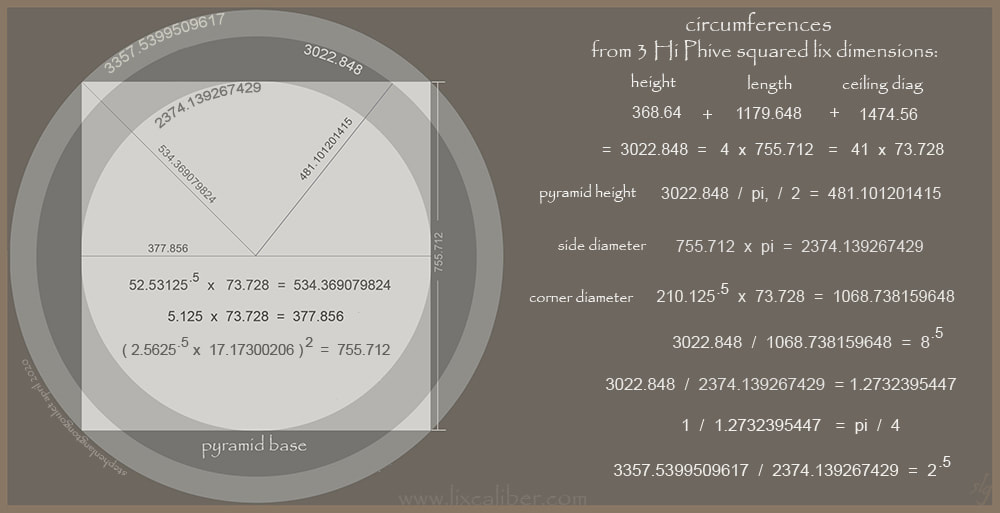 Yes, we just pulled the base and height of the Great Pyramid from
three squared dimensions of the Hi Phive chamber!

Which brings us neatly back inside for your introduction to the middle chamber:

At actual size, the "Point Phive", (queen's), chamber dimensions
are also determined through the lix number code, with one extra step: 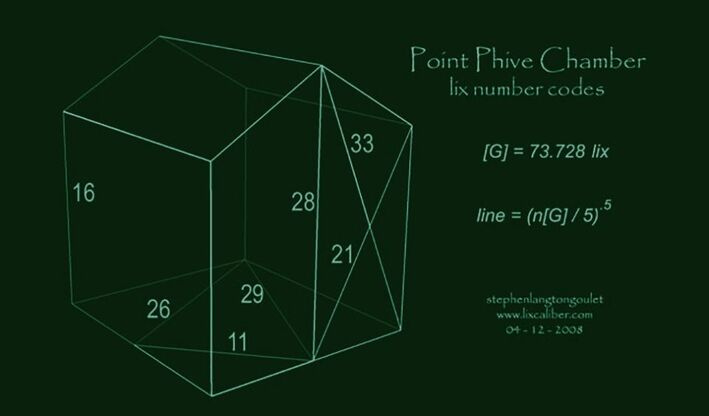 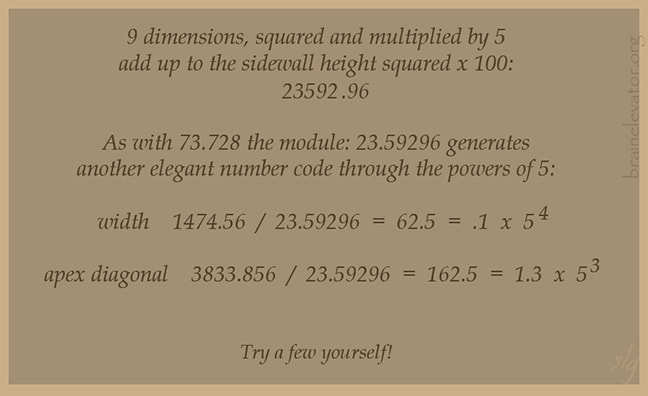 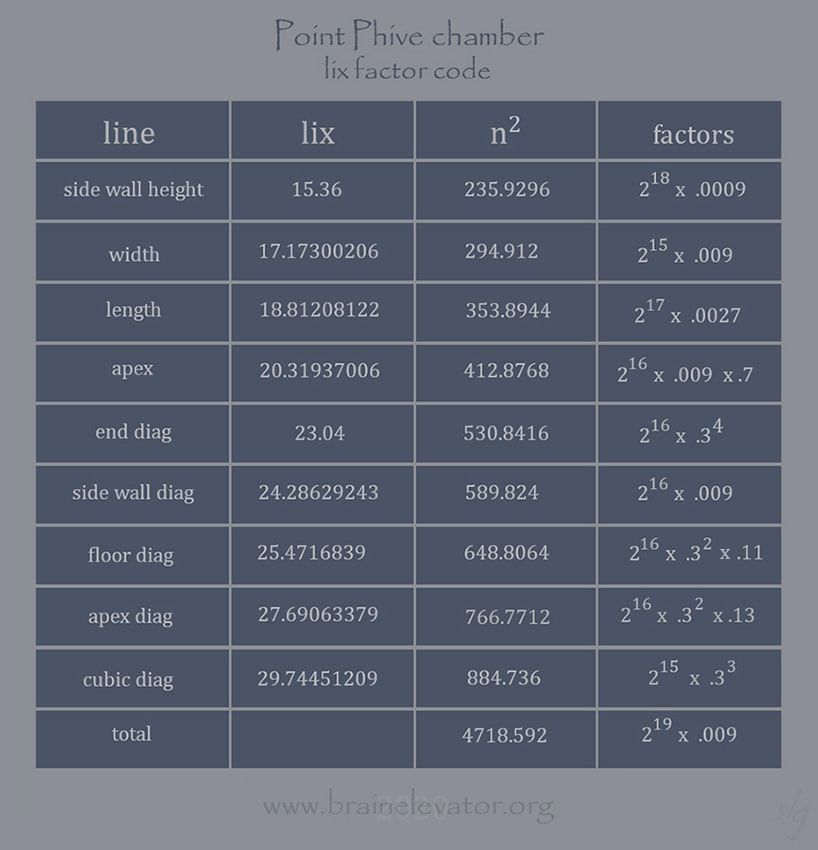 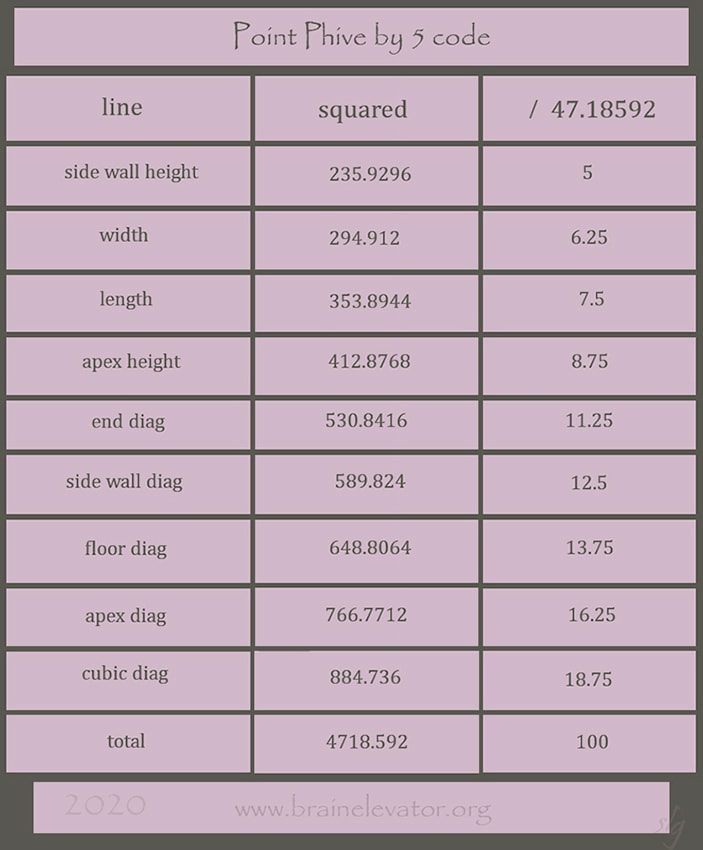 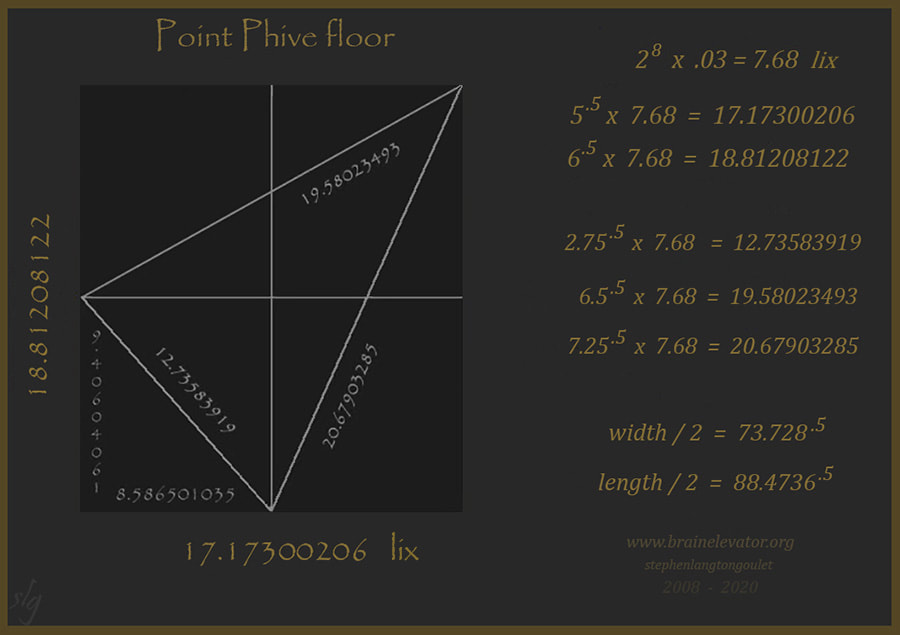 This day, a startling series of ratios materialized out of my "Indig Square of Nines", recently posted
to sister site, lixcaliber. What follows is a clear and concise iteration of modules, ratios and chamber
dimensions, apparently, from outside the chambers, beyond the pyramid itself. 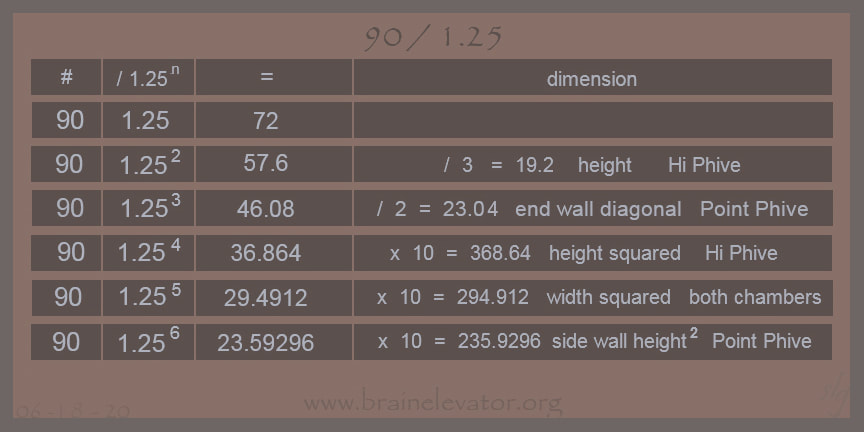 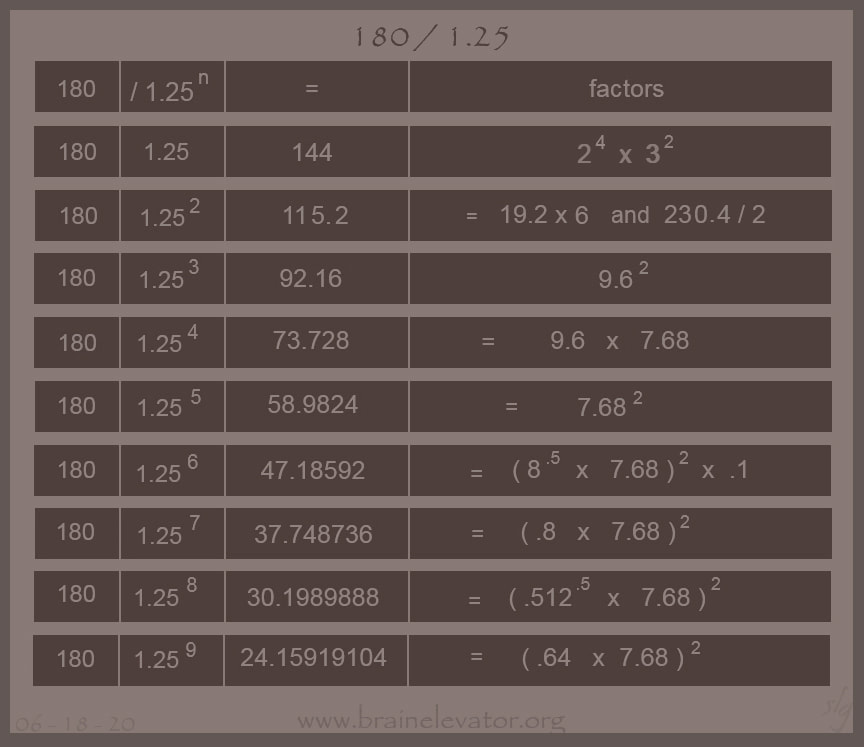 Remarkable affirmation, taking us back to the beginning, to 1.25, introducing 7.68 and 9.6, half
the chamber heights, all the while circling the entrance to the brainelevator in a sublime
flourish i never imagined possible, or even necessary, a few days prior.

Excerpt, "Knowledge of the Forever Time"
"The mathematician sees the wonder of the Great Pyramid of Egypt and with mathematics he sets out
to reveal the purpose of its creation. He will count the stones, measure the heights, weigh, divide, calculate and subtract.
He will obtain the mean, the angle, the footage, the pi and the circumference and, when he is finished, he will walk away
bewildered and scratching his head. He will leave it no more certain than he did when he came to it."    Damon T Berry

Realizing the two upper chambers of the Great Pyramid at Gizeh fit geometrically inside each other
i imagined the next logical step was build a model. It was fortuitous when economic factors determined
the prototype would be half size because here the lix dimension formulas are revealed at their most eloquent
beginning with a profound reciprocity..... 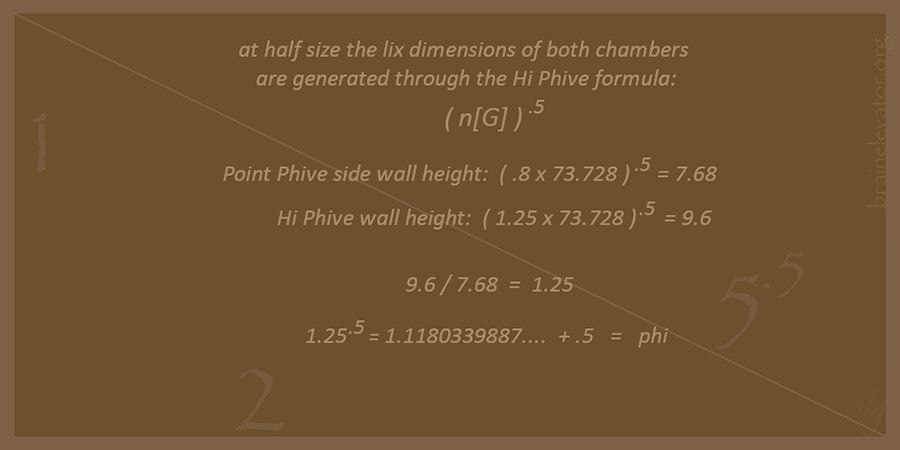 Every 1 x 2 rectangle in the known Universe contains
the height of the Hi Phive chamber
(half the diagonal:  1.25 to the power of .5)
every other dimension within it
every dimension of the Point Phive chamber below it
the entire structure around it
and ultimately back
to where we found the lix unit
in planetary geometric centers arrayed
on an expanding golden ratio grid. 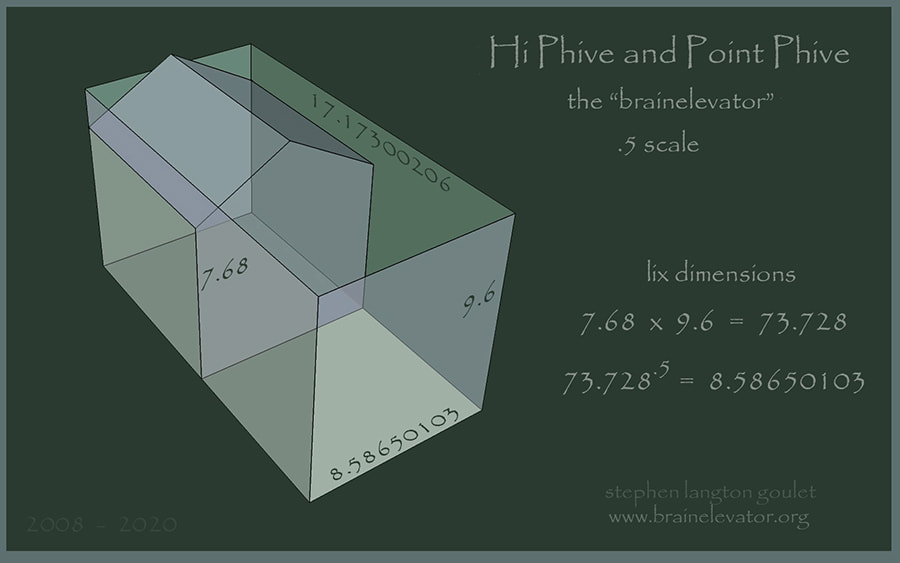 Some things are beyond the capacity of metaphor to convey and one simply has to take some time and do the math. 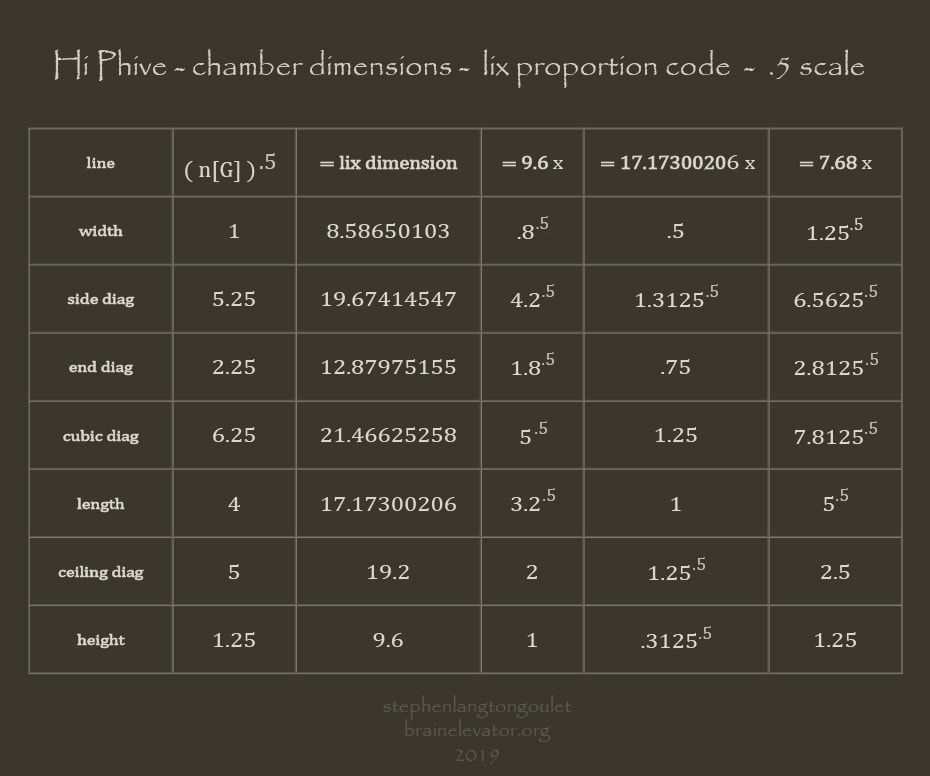 The claim, for generations, that nothing is perfect, always made me wonder
what we keep such a perfect word around for. 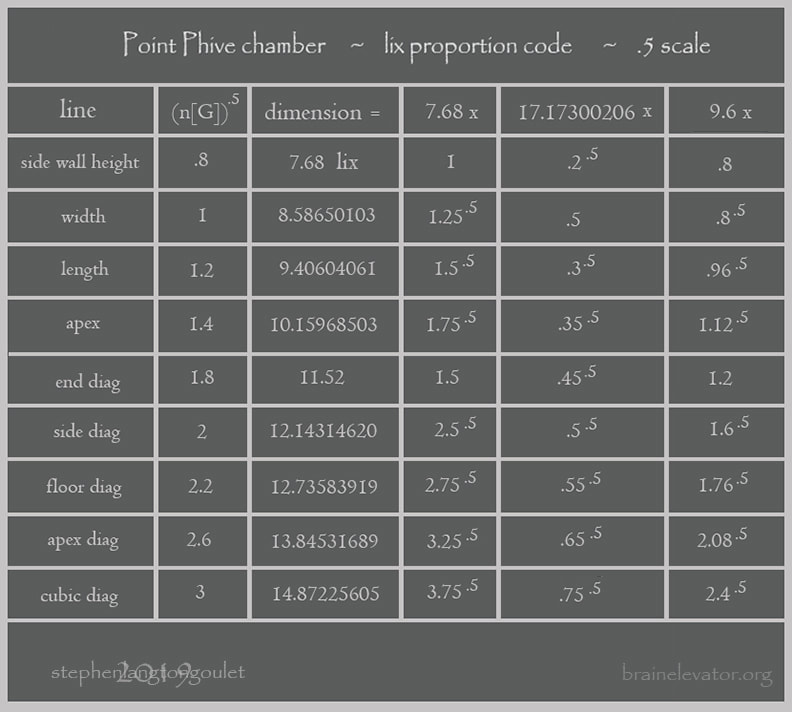 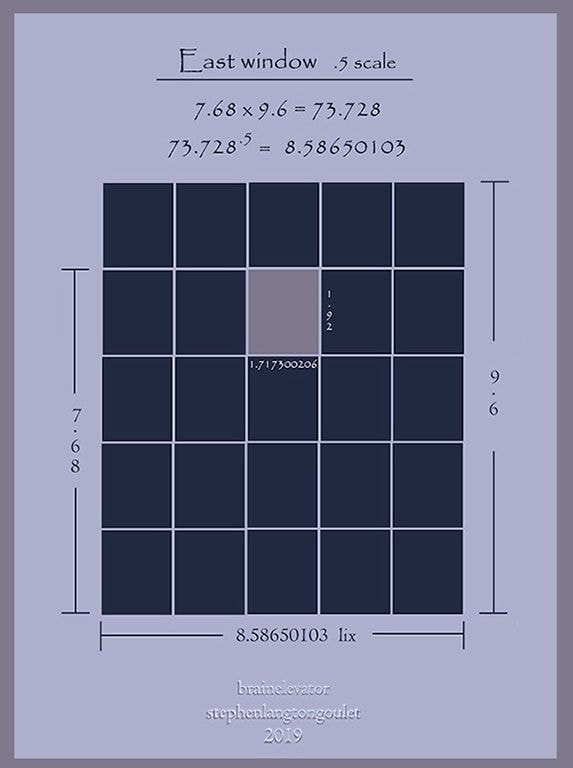 250 of these "windows", or mirrors, will completely cover the interior of Hi Phive. 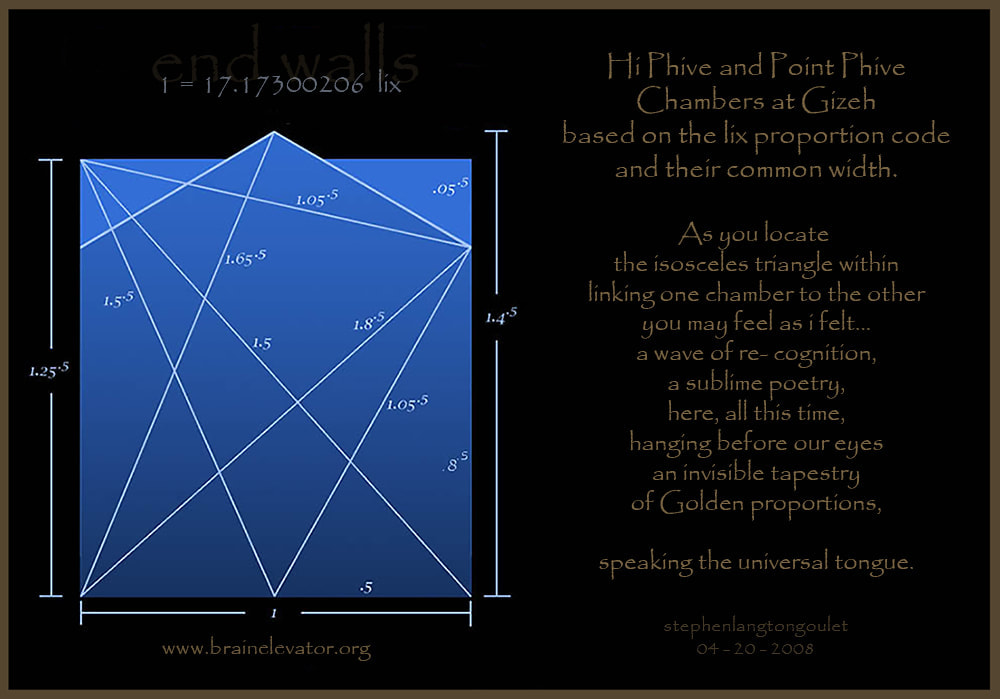 If you made it this far you must realize the Architects and Engineers would never have gone to such great lengths
for at least one generation, cutting, dressing, dragging and placing over two and a half million stone blocks with
uncanny precision, each weighing on average 2.5 tons, without a scale, a blueprint....and a very good reason.

Well, neither would we. 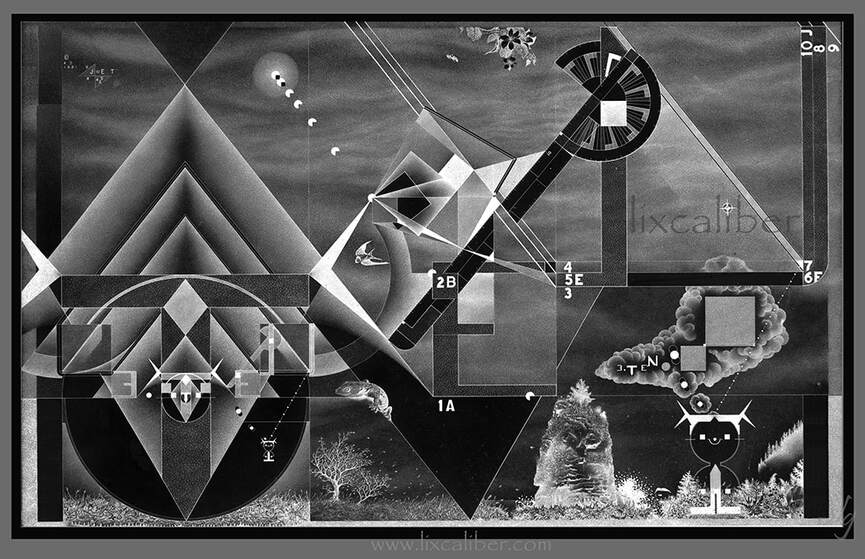 " 3Ten (triten) Measure, the Legend of Joey Bee", plots planetary mean distances on an expanding
golden ratio grid, with "lixcaliber", the Mother of all scales, found embedded, and emerging,
from the heart of the Great Pyramid through slope angle, 5E. 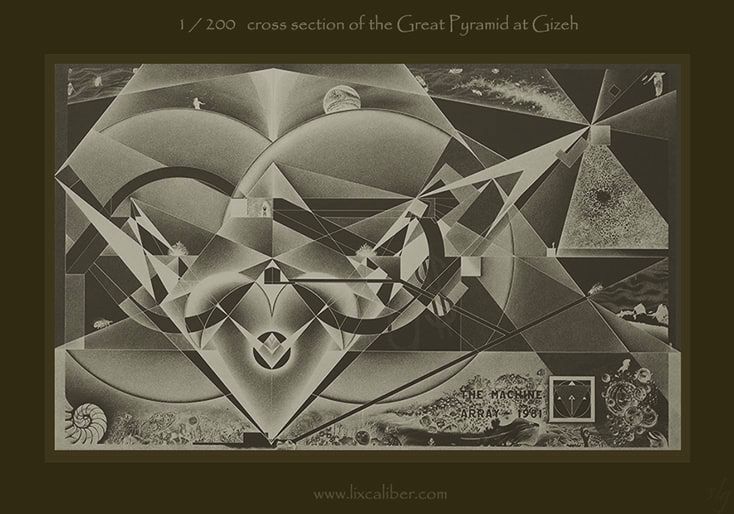 For now, "The Machine Array", speaks for itself.

Four scale drawings comprise the series. The other two,
"Venus, (mind/heart)" and "The S.E.A. of the Machine Array"
await in the wings.


A few years back a lidar image of the Great Pyramid was released revealing a cloudy cigar shape above
the Grande Gallery. On both of the drawings above, a twisting series of 6 squares emerges from the line
of Venus ( 2B ) where 13 lines meet suggesting a chamber running 90 degrees (east/west) from the others.
A 45 degree angle through the largest square touches "10", one lix, on lixcaliber.

The Mother of all scales, the first artifact Joe and i found within the pyramid, was located
at this position after nearly all the other lines were rendered. 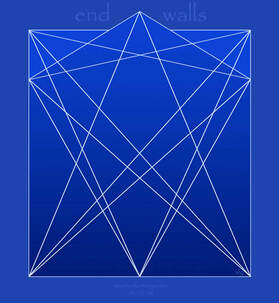 Consider......at a particular point in the distant past, a desperate need to preserve critical information arises.
The severity of the crisis suggests dozens or even hundreds of generations may pass before the information
will be rediscovered, let alone translated and understood. Looking back, at the certainty of doom those people
faced, one can't help but marvel at the courage, dedication and sacrifice, en masse to expend their final
generations preserving all they valued most, for an unknown and uncertain future people.
It staggers the mind, that level of commitment.

Additionally, how could a valuable trove of essential knowledge be kept safe and unblemished
when even the most robustly constructed "libraries" eventually crumble, submerge or burn?

Their plan was the Great Pyramid.
The system of Measure guiding their purpose
lays out the foundation of their message.
Its language is universal:


No claims are made here about the source of this geometry beyond the obvious. It had to be well known
long before a "lix" pyramid at Gizeh could be designed and assembled. Any speculation i might provide as an
artist would be woefully inadequate as i am by no measure a mathematician, archaeologist, engineer,
cosmologist or prehistorian to offer such context. Clearly, this will be part of a larger discussion
i look forward to participating in.

Locating the lix unit in the planetary mean distances and the scale, lixcaliber, in the heart of the pyramid
was and remains a transcendent experience. Years later, witnessing a "brainelevator" emerge from
the combined chamber dimensions, as a crystal unfolding in the air around me, ever more so.

Joe and i pried a few cold stones aside, far enough to let some light inside.
After four decades within this work, light continues pouring out.

There is one thing i recognized early.
Modern civilization got off on the wrong foot.

An introduction to the "lix coffer code", will be posted next.

These webpages are condensed and updated versions of sites i've produced and maintained continuously since 1996.


We put too much into this work to waste your time so if you made it through intact, albeit a few white
hairs, know i admire and appreciate your patience and attention. Should you recognize something here
beyond metaphor's capacity to explain away, dig in and learn the ratios, modules and dimensions. Go
where the numbers lead you. Confirm, verify and connect each step. I continue to believe, recent
developments notwithstanding, Joe and i have barely scratched the surface.


This final graphic is for those who jumped to the end for the expected gist, soundbite,
hashtag, meme or punchline, without doing the math and proofing it yourself: 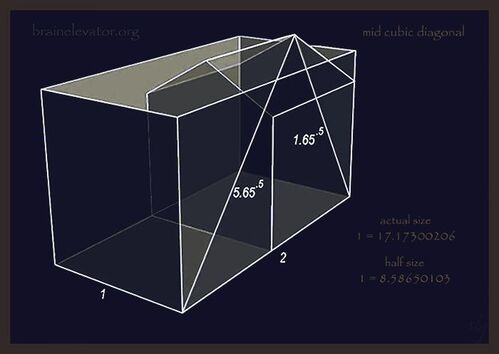 Seeking can become a lifelong passion. Finding presents a fundamentally different challenge.
As it turns out, by any metric, having to re-ruler the World alone, is no picnic.

Speaking of measure, sister website, lixcaliber.com, an introduction to the lix grid, planetary geometric centers
and the Mother of all scales is where we're off to next. It's under reconstruction so heed your head. 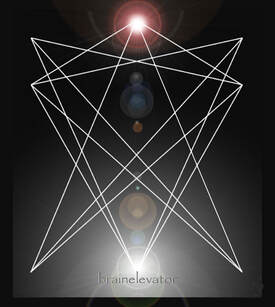 For Venere, who always asked the best questions.